Cats are full of mysterious actions, and for a lot of those actions, there are no explanations (like why do they knock glasses off tables? That one is still a head-scratcher.)

Other funny quirks, however, have perfectly reasonable explanations. Here’s why your cat sits in small boxes, kneads, goes crazy for catnip and that all-important question: why do cucumbers scare them so much?

Why do cats love boxes?

Cats seek small, enclosed spaces because it makes them feel safe. Cats also make nests – small, discrete areas that provide sanctuary for themselves or their kittens – in confined spaces.

Because cats typically give birth in a small, confined space (such as a box), being back in a small space gives them the same feeling of comfort and pleasure that they experienced as kittens. It’s similar to the reason it feels good for humans to “burrito up” with a big blanket on the couch – no matter what age we are, it feels good to be swaddled.

A taped square on the floor is, obviously, not a real box. However, it gives the illusion that it’s a small space, and cats still flock to it instinctually.

If they fits, they sit – because they feel safe.

Why do cats knead their claws into things (including humans)?

This one is a little more of a mystery, but it comes down to two basic reasons: contentment, or instinct.

Kittens knead their mother’s belly instinctually when they are nursing – it stimulates the milk production. Once they stop nursing, it’s possible that cats continue to knead because they associate the gesture with the comfort of nursing. If your cat begins kneading your lap while you’re petting her, she’s simply returning the affection. Of course, this could get painful if you don’t have a thick blanket or pillow between you and her claws!

On the other hand, cats’ paw pads contain scent glands, and kneading activates those glands, so they could knead to mark their territory. A female can kneads when she is going into estrus, also known as going into heat. Wild cats used to tamp down tall grass and leaves to make a soft, protected bed, and it may be that modern cats still do this when they are settling down.

Why does catnip make cats either go crazy or mellow out?

Catnip has different affects, depending on whether your cat sniffs it or eats it. When inhaled, catnip makes cats flip out – literally. They flip, roll, rub, and meow. When ingested, it makes cats extra calm. Either way, the effects wear off after about 10 minutes, so whatever your cat is doing, it won’t last long.

However, don’t be surprised if catnip has no affect on your kitty whatsoever – only about half of cats have a reaction to nepetalactone, the essential oil in catnip, according to the Humane Society. The trait emerges when a cat is between three and six months old.

Catnip is generally considered safe, but like all good things, too much is bad, and if they eat too much, they can get sick.

Why do cucumbers scare cats?

In most videos of cats jumping sky-high when they see a cucumber, the cat is eating, turns around, sees the cucumber, and flips out. Cats only eat when they feel that they are completely safe and, long story short, the cucumber scares them because it wasn’t there before they started eating. If you’ve ever turned a corner or opened a door and unexpectedly ran into someone, you’ve experienced the same thing. There’s a popular theory that cats think the cucumbers are snakes, which is possible, but either way, giving your cat a scare isn’t very nice!

Cats are funny animals, but they’re also intuitive and smart. If your cat is doing something silly, there’s likely a good reason behind it – you know, besides “the Internet thinks it’s funny!”

How to include your pet in your emergency preparedness planAnimal Health 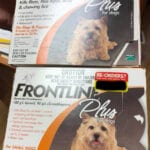 Don’t be duped by dupesAnimal Health